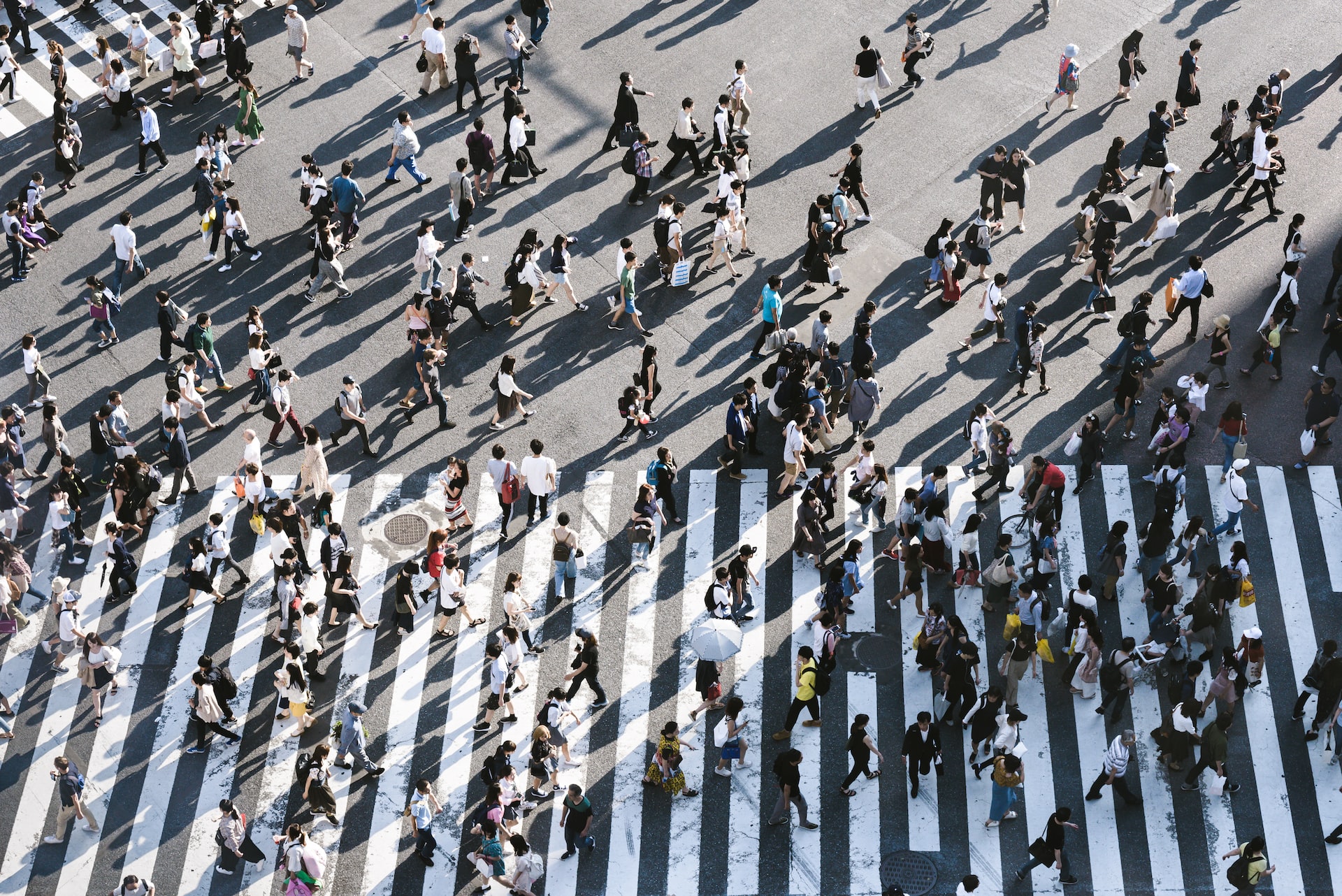 Today is the last day when the number of people alive will start with a seven. Sometime late Tuesday afternoon, or perhaps early Wednesday morning, the population will cross the eight billion mark. When I was a kid, the number they taught us in school was five billion. By the time I was in college, it was up to six, and a decade ago it hit seven.

Now it’s eight. Is this just a factoid, a little piece of trivia we have to keep updating so we can win pub quizzes?

I don’t think so. Oh, the specific number is arbitrary enough. But the trend, the larger pattern — that’s important. Take a look at this graph: 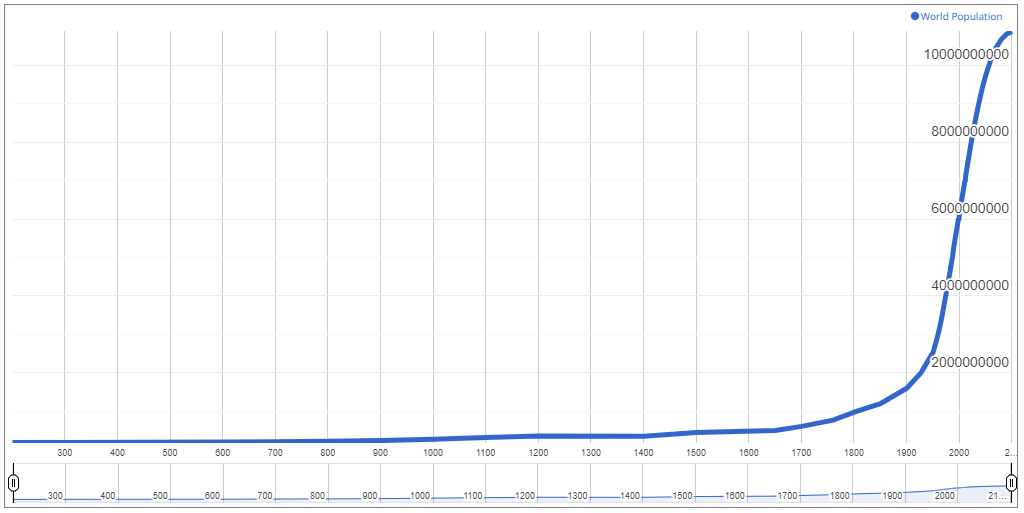 For most of human history, humans could by counted in the millions, not billions. We hit one billion around 1800 have been growing exponentially ever since. I haven’t been around quite long enough to see it double, but my parents have. But here’s one interesting thing: it’s not likely to double again, not unless something drastically changes. The growth rate is slowing, the population curve is flattening out, and current projections have the population stable at around 11 Billion by the year 2050. Which means this past century may be completely unique - the only time in all of history when six billion new humans were added in a single century.

In ecology, they sometimes draw this sigmoid growth curve and divide it into phases:

In a typical ecological model the carrying capacity is determined by food supply, but in the case of humans it seems to be driven by the demographic transition but some ideas still carry over. There was a period of exponential growth where there always more young people around than old people. Resources seemed unlimited and growth was unchecked. The population pyramid is very wide at the bottom.

However, as we approach the plataeu, everything changes. Growth slows and eventually stablizes. Competition over scarce resources increases. The population pyramid narrows and there relatively fewer young people around.

Japan provides a sneak peak into what we’re likely to expect globally. In Japan, their growth rate has already become negative, resulting in a large elderly population that is straining their social support systems and weakening the economy.

Here’s a little piece of folk wisdom from my days as physics student: “If any quantity changes by more than an order of magnitude, double check all your approximations. They may no longer be valid.”

For example, you’ve probably heard of turbulent and laminar flow.

Both are fluid flows ultimately based on the same equations. There’s no hard cut-off between the two. But they behave extremely differently; so much so that that its easier to try to understand them as two separate phenomena.

Changes in scale often result in this kind of so-called regime shift.

We can tell a similar story across a wide variety of problems. A human can run about 8 miles per hour. To go from 8 mph to 80, you don’t just “run harder.” You need to build an engine or jump off a cliff. To go from 80 to 800, you need a jet and an airframe specifically designed to break the sound barrier. At 8,000 mph the physics of airflow go through another qualitative shift as we enter the hypersonic regime. Not only do you now need a scramjet, you also need to start seriously worrying about how your going to get rid of all that heat. Each order of magnitude isn’t just harder, it’s completely and qualitatively different.

Population is not the only thing that’s been growing exponentially. In his 1975 book Science Since Babylon, Derek de Solla observed that the number of PhDs being issued was doubling roughly every 20 years. This fact is often communicated with the vivid expression, “90% of all scientists who have ever lived are alive today.”

While some of this is driven by population growth, increased availablity of education also plays a role. As a result, this number is actually growing faster than population.

All those scientists and engineers building and figuring out stuff cause a lot of churn.

In the whispering quiet of Heaven’s night you imagine you can hear the paradigms shatter, shards of theory tinkling into brilliant dust as the lifework of some corporate think tank is reduced to the tersest historical footnote…
- William Gibson, Hinterlands

The first time I really felt this first-hand was working with JavaScript frameworks circa 2010. It was a wild time. Entire frameworks would come into existence, become de facto standards or best practices overnight, and be considered outdated and untouchable a year or two later.

Oh, you’re still generating HTML on the server? Haven’t you heard about AJAX and XHR? The X stands for XML which is going to be the Next Big Thing. Of course, you would never actually pass XML; that’s so last year. (Yeah, that includes XHTML; we’re moving forward with HTML5 because it turns out getting developers to consistently close their tags is really hard.) No, everyone is passing JSON to REST APIs now. Actually, use jQuery to do it for you. What, you’re still using jQuery? You gotta get up to speed with MVC frames like AngularJS. They’ll bind your data to HTML for you. Thank you for being an earlier adopter of AngularJS 1.0; please transition your project to AngularJS 2.0 where we’ve broken backwards compatibility every way we can think of, plus a couple new ways we invented just for this project! Actually, let’s all just use React. (How about Vue? Oh, I’m fine; how are you?) Of course, you’d never actually write your own HTML/CSS; you’d use components and a CSS framework like Bootstrap. But obviously component libraries are rigid and inflexible and we should write our own “lightweight” HTML. Don’t forget to add responsive design! And support Retina! And touch events. Gotta bend over backwards to support IE6 - just kidding, it’s all Chrome now. Don’t use Python on the server — use Node.js. Oh god NPM is so bad but never mind: gotta move fast, break things. Don’t use JavaScript — use CoffeeScript or TypeScript. Actually, JavasScript is fine now. (Thanks ECMA!) Here’s one way to package JavaScript into modules. Here’s another, incompatible way. Maybe a third-party library can help unify the two? Oh, actually now there are three incompatible ways to package modules.

My suspicion is that kind of maelstrom is going to become increasingly common as the overall rate of innovation continues to increase. Workers in a variety of fields will have to find their own strategies for coping with this kind of constant, overwhelming flood of change. Programmers were able to adapt by moving to CI/CD workflows, but programmers have always been very good at writing their own tools to meet their own needs. Other fields and industries won’t necessarily have that capability and it’s hard to see how that will play out.

If it’s true that the population does stabilize at around 11 billion, then I think future historians will draw a sigmoid population curve and divide history into three phases - the low population era ancient and medieval history, the transitional centuries, and steady state of what they will think of as “modernity.” We, of course, would be in the pre-modern transitional period, albeit at the tail end of that.

What will that new world look like? Well, there are something we can say:

These are the first-order, easily predictable effects. But they already paint a picture of a very different world which will lead to second-order effects which are much harder to predict.

To take one trivial example, currently workers in many fields are expected to move up to management after they have a decade or two of experience. But that model only works if there’s a cheap and plentiful supply of young, inexperienced people. If the population pyramid drastically changes shape, that basic assumption could change and executing projects where all the real work is done by the least experienced people may no longer be the dominant strategy. Of course, cultural lag could mean it could take a long time for people to realize that even if it does come true, because concepts like hierarchy and expected career progression are baked into our culture at an almost subconscious level.

There’s never going to be a specific date we can point to and say, “there! that was the day the modern world began!” But eight billion people on November 15th, 2022 is as good as any a point as any other to start thinking seriously about the end of exponential population growth, the increasingly constrained resources of our planet, and the dizzying rate of change that will characterize the rest of our lives.